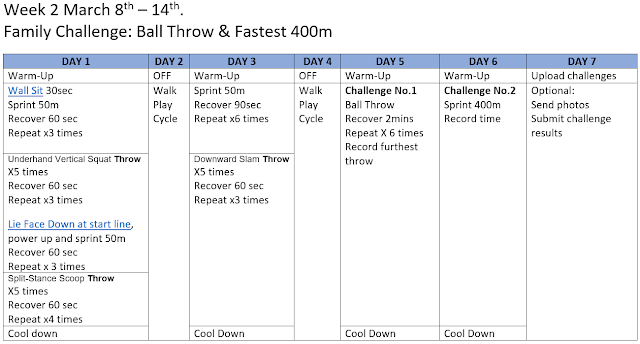 Lie Face Down at start line

Virtual Event due to Covid-19 Restrictions. 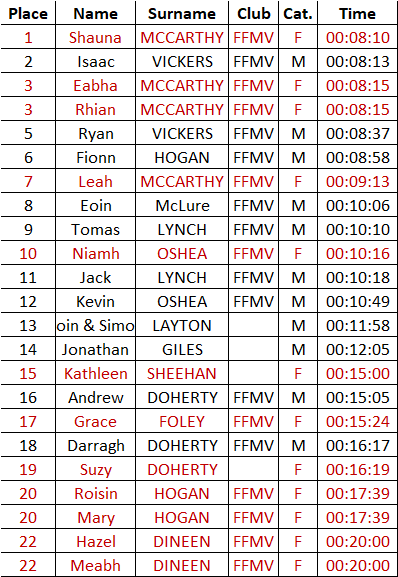 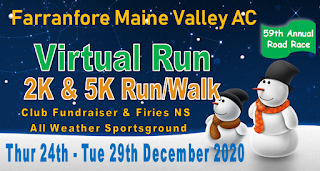 On Line Entry ONLY: www.myrunresults.com
One of the oldest road races in Ireland takes place every St. Stephen's day. It has been run since 1961 along the same route. Now in its 59th year, is normally run from Farranfore to Firies and back to the finish in Farranfore.

As we all know we cannot hold a Road Race as normal this year, however, we have decided to hold our 59th annual road race as a VIRTUAL event.

Farranfore St. Stephen's Day 5K is the main fundraiser for our athletic club, with the proceeds used for promoting athletics in the community. We will also be funding the long awaited development of the Firies National School All Weather Sportsground.

Participants can support the race and run in their own localities. It will have distances of 2km and 5km to help encourage runners / families of all ages to participate. The events will take place virtually from Thursday 24th to Tuesday 29th December.

You have the following options when you enter:

You can run the distance as often as you like within the specified dates. Simply upload your result online through myrunresults to be in with a chance of winning our many spot prizes. Kindly sponsored by the local community race sponsors by way of vouchers. We want to keep all proceeds for this event local so to support in these uncertain times.

Health and safety is top priority and it is too soon to have a mass participation event. We eagerly await the time when we can have road races again but until then we hope that you can help us in our fundraiser and promotion of athletics in Kerry. 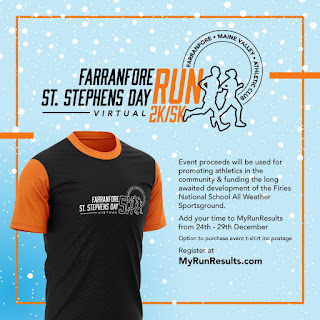 The Annual Irish life National Masters Track & Field Championships were held in Morton Stadium on Sunday 6th September. Later than usual, due to Covid-19. Due to restrictions each athlete was only allowed to enter in one event. However, this did not have a large impact on the numbers competing. Their was a larger than normal increase in the men's distance races.

Arthur Fitzgerald was our only club member competing this year. It is Arthurs very first time competing as a master at the track and field events. Competing in the 1500m M35 race, which was, as usual, very competitive at National level. Arthur ran very well to finish 8th overall and in a time of 4:28. Arthur has been a member of the club from Juvenile level and has achieved great records throughout his athletics career. We hope he has many more at the Masters level. 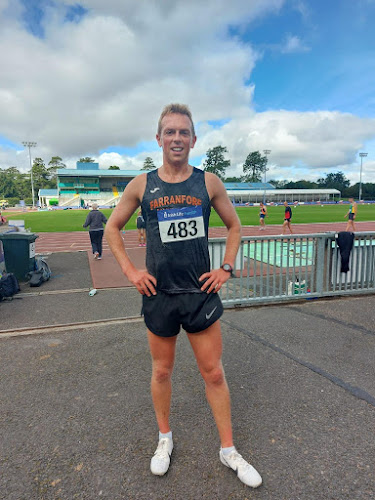 Kerry Way Ultra
Well done to Dermot Dineen who competed in the Annual Kerry Way Ultra held over last week-end. Dermot completed a 78Km leg as part of a relay team from Caherdaniel to Killarney. An overnight treck along the scenic Kerry Way. A great test of your mental endurance and overall fitness. Great achievement.

We had a good turnout to our first group session since March. It was very enjoyable running in Inch beach. Thanks to all our helpers who helped out in both our Juvenile and Senior groups. Hope to be back again soon. Next planned session will be posted in WhatsApp group.

Presently there is no update in regards County Cross Country fixtures or venues at this time. This topic should be discussed in the next County Board meeting which is planned for after Sept. 13th.
Email ThisBlogThis!Share to TwitterShare to FacebookShare to Pinterest

We hope you and your families are doing well. We are glad to be able to update you all with some Athletic events after almost 6 months.

It has been a long journey with many changes in how we live our lives. However we are a resilient group and we will prevail.
Leaving Certificate Results:
We wish all our Leaving Cert students of 2020 all the best in their results next Monday, September 7th. It has been a very challenging year for you and your teachers so don’t be too hard on yourselves. Celebrate responsibly!
Back To School:
We wish all our juveniles the best of luck in returning to school. There will be a lot of mixed emotions, but stay positive and look forward to meeting up with all your friends again.
National Senior Track & Field Championships 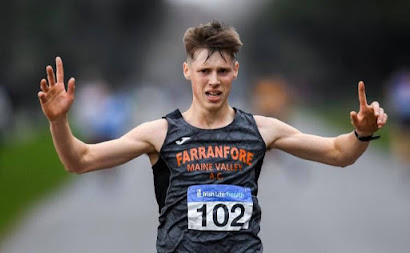 This year's National Senior Track & Field Championships were held over two weekends in order to comply with Government Covid-19 guidelines. There were some very exciting races. So if you missed any, all results and videos are on the Athletics Ireland website and Facebook page.
Our very own David Kenny was competing in the 10,000m Race walk last weekend. David, who is coached by Rob Heffernan, had a great race to finish in second place with a time of  41:38.45. Training partner  “Callum Wilkinson (Togher AC) was the winner in a time of 39:52.05 and third place went to Brendan Boyce (Finn Valley AC) in 42:19.19.89
Club Training
Our club committee has met and plans are in place to commence training for our juveniles and seniors. We will update you shortly.
Athletic's Fixtures
The Irish Life Health National Junior and Masters Championships will take place over the weekend of 5th & 6th September. Due to Covid-19 there are strict guidelines in place which allows only two events for Junior's and one event for Masters. Those attending please review AAI facebook page for updates as they may change.
Email ThisBlogThis!Share to TwitterShare to FacebookShare to Pinterest

Athletics Ireland Competitions and Juvenile committees are pleased to announce the following schedule of competitions for 2020 Irish Life Health Outdoor Track and Field season subject to the easing of government restrictions.
Competitions are subject to government restrictions being eased and will have additional measures in place to ensure that the competitions are safe for all athletes, officials and spectators.
Further details will be announced in the coming weeks.
Email ThisBlogThis!Share to TwitterShare to FacebookShare to Pinterest 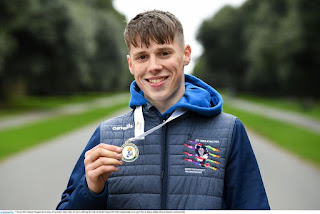 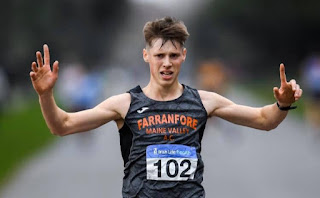 National Senior 20Km Race Walk
The National 20Km Race Walk Championships were held on Saturday March 7th in St Anne's Park Raheny. David Kenny, who just recently won the National Senior Indoor 5K, showed great determination and attacked each and every lap to win the championship in great style. He took almost two minutes off his personal best time and olympic qualification points. His time of 1:23.07 was 98 seconds ahead of silver medallist Brendan Boyce of Fin Valley who in turn was 40 secs ahead of bronze medallist Alex Wright who unfortunately suffered a 2 minute penalty.  A true champion and great ambassador to all athletes. 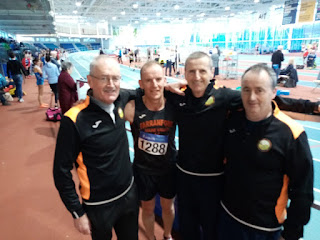 The National Master Indoors was held in AIT Arena on Sunday March 8th. Four of our master men athletes were in action.
Mike O'Connor was second in the M70 3K Race Walk (19:10).
Jerome Foley had a busy afternoon competing in 3 events. Doing very well, Jerome M55 was first in the 800m (2:16), second in 400m (60.10) and third in 200m (27.20).
Sean O'Shea competed in the field events where he also did very well. He was second in M50 Shot Putt (10.64m) & third in WFD (7.07m). Our youngest master,
Dermot Dineen was in action on the track with the distance races. Dermot M40 ran a personal best in the 800m in a time of 2:10.56 5th overall and ran a very good 1500m finishing in 4th place (4:38.14). Well done to all. Great to see our club singlet at national level.
British Masters Indoors
Jim O'Shea crossed the water to compete in the British Masters Indooor C'Ships. Held in Lee Valley Stadium London on Saturday 7th March, always a great event with plenty of competition. Jim won gold in the M75 Long Jump 3.80m and to cap off a great day he also won gold in the M75 High Jump 1.20m. 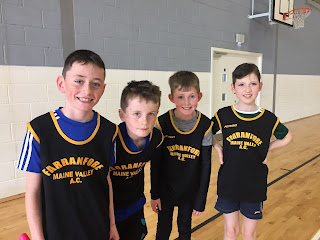 The County Juvenile development Sports Hall Games was held on Sunday 8th March. Record numbers attended this event which is designed for the development of our juvenile athletes between the ages of U9 to U12 and a great introduction to a range of events in a non competitive stage. Thanks to all those who helped out on the Day as it takes alot of volunteers to keep things running smoothly. Well done to our boys who competed. Fionan Sexton, Thomas Lynch, Michael Daly & James O'Sullivan. They participated in all events, making the semi-finals of the sprints and was fourth in the Relay Final. Also, Josh Nelligan competed in all the U9 events

Club TrainingMaria's Strength, Endurance & Flexibility Exercise Classes on Tuesday from 7pm at the Sports Hall in Farranfore. Class is designed for all abilities from secondary school upwards. €5 per class.
Juvenile Indoor Training has now finished and we will take a break for the next two weeks. On Tuesday March 24th 6pm we will be back out doors getting ourselves ready for the County Outdoor Track & Field in May.
Thursday Nights from 7pm for Seniors and juveniles U12 upwards. Grass Session on GAA Field Farranfore. €2 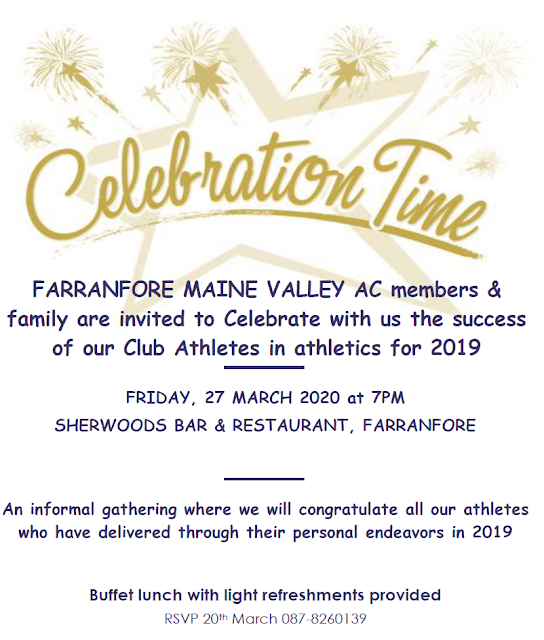 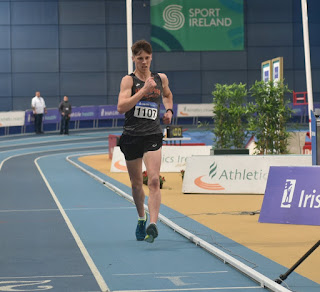 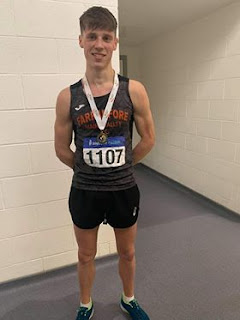 Caitriona Barry was second lady finisher in the Tralee 10 Mileer on Sunday March 1st. Caitriona completed the distance in 1hr 9mins. Also running was Aidan McCarthy who finished in a time of 1hr 18mins.

Following our Clubs AGM we would like to welcome to our new chairman, Peter Vickers & new secretary, Pauline Joseph.